Our process allows us to nitrify and denitrify, in one tank, removing harmful Ammonia, Nitrates, Nitrites, with minimal Nitrous Oxide emissions, without the need for additional processes or infrastructure

Wastewater contains environmentally dangerous substances that can be transformed into harmless compounds like nitrogen gas and water by adding  and removing molecules  and electrodes. The danger with this process is that when going through the steps it transforms one harmful substance to another and gives off Nitrous Oxide in the process. The Total Nitrogen Removal process begins with the MABR module adding oxygen to the wastewater and the denitrification process occurs when the biofilm on the membranes consumes the oxygen.

Ammonia is present in most, if not all, wastewater types and varies in levels depending where it has come from. The key sources of ammonia are industry, urine, organic matter, agriculture and food preparation. There are dedicated industries focused on the production of ammonia for things such as bleach or hair dyes however it is not economical to consider it a resources from wastewater treatment.

Why remove Ammonia from wastewater?

Ammonia released into the environment has many effects and is the leading cause of eutrophication (over supply of nutrients to a body of water). Released into lakes and rivers can produce a harmful algal bloom or into seas can create a red tide. Nitrates are necessary nutrients for algae and phytoplankton growth. Discharge of nitrates to surface water bodies greatly accelerates the natural process of eutrophication, causing algal blooms which ultimately lead to depleted oxygen levels and generally poor water quality.

Ammonia in a body of water can also make it impossible for amphibious animals to get rid of their toxins causing poisoning and killing off of animals.

Across the world governments are creating more aggressive strategies on the removal of ammonia. The internationally recognised problem can be met with heavy fines and legal action for companies, cities and countries that fail to comply.

Nitrous oxide is heavily emitted from poorly managed plants. It can come from unintended consequences from genuine attempts to reduce carbon emissions by reducing energy used in treatment; however, the damage produced is much worse

Nitrous Oxide (N2O), also known as 'laughing gas', accounts for around nine per cent of total greenhouse gas emissions, it has around 300 times the global warming potential of carbon dioxide and stays in the atmosphere for about 120 years. With a similar potency to chlorofluorocarbons (CFCs), it is considered the single most significant cause of ozone depletion over the Arctic.

The nitrification and de-nitrification managed effectively, can severely reduce the amount of N2O a plant produces.

OxyMem's solution improves on this idea again making up for losses traditionally incurred by most plants on energy and extra footprint. We provide robust and energy efficient supply of oxygen to a wastewater treatment plant and allow them to carry out nitrification and de-nitrification in one tank saving land, time and money.

Nitrous oxide is one of the six greenhouse gasses targeted by the first UNFCCC Climate Change accord (Kyoto). Nitrous Oxide is keenly monitored across the globe, and most governments will produce hefty fines or further action for failure to meet the requirements.

Why remove Nitrite from wastewater?

Nitrites are a salt or ester anion of nitrous acid, can be naturally or artificially occurring in groundwater. Nitrites come from fertilizers through run-off water, sewage, and mineral deposits. Nitrite is used in food production for the curing of meat products due to it inhibiting the growth of bacteria. It can stimulate the growth of bacteria when introduced in high levels into a body of water.

High levels of nitrites are toxic to humans and animals, especially infants. It can enter the body as nitrate, a nutrient which is essential to plant growth and converted into nitrite, which disrupts the oxygen delivering ability of haemoglobin in the bloodstream. Infants can develop a life-threatening blood disorder known as 'blue baby syndrome' (methemoglobinemia) if exposed to it in water or formula mixed with water that is contaminated with nitrate.

The danger nitrites impose on drinking water, aquatic life and young animals various international government bodies recognise the importance of removal and continuously are increased the standards accepted as the issue becomes more prominent. Failure to act on these can have serious legal consequences for private, public and country.

Nitrate produces after the nitrification stage of the process of removing ammonia. It is also commonly found within the wastewater influent. The sources of nitrate may include runoff or seepage from fertilized agricultural lands, municipal and industrial wastewater, refuse dumps, animal feedlots, septic tanks and private sewage disposal systems, urban drainage and decaying plant debris.

Nitrates have the same effect on aquatic plant growth as phosphates and thus the same negative impact on water quality. It stimulates plants and algae to overgrow, which provide food for fish, animals and insects. But, if algae grow too recklessly, oxygen levels in the water will be reduced, and aquatic life will die.

Because of the danger nitrates impose on drinking water, aquatic life and young animals various international government bodies recognise the importance of removal and continuously are increased the standards accepted as the issue becomes more prominent. Failure to act on these can have serious legal consequences for private, public and country. 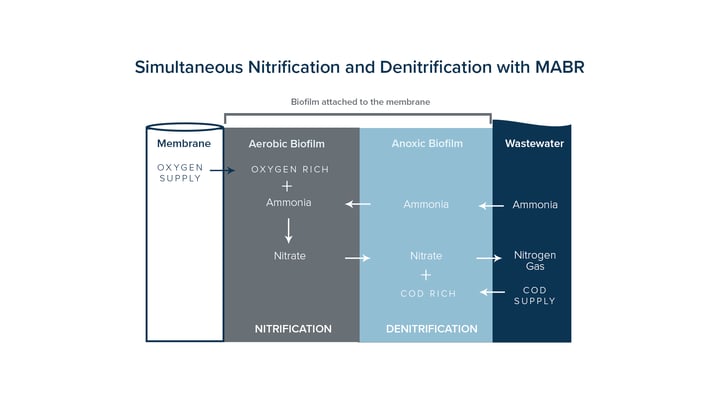